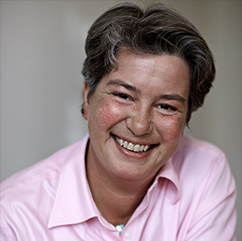 The Tech Transfer Office consists of 13 tech transfer professionals responsible for the identification, the protection and the commercialisation of research results produced by the academic community. The Office also negotiates all IP-related research agreements between the university and external partners. The Office handles around 70 invention disclosures per year, it entered 23 license agreements in 2015, created 5 spin-outs and negotiated +800 research agreements.

The Office manages “Copenhagen Spin-outs”, a collaboration between three TTOs and central stakeholders who work together to create more biotech spin-outs from academia. Recently the same group has launched “Copenhagen CEOs”, a project aimed at helping researchers wishing to spin-out their own companies and preparing them with the task ahead.

Karen lived and worked in the United Kingdom from 1992 to 2002. She was employed for six years with the University of Glasgow’s commercialisation office, Research & Enterprise. As the office’s International Marketing Manager she was responsible for the international promotion of the University’s research expertise. Prior to joining Research & Enterprise, Karen worked at The British Council Scotland on an export promotion project funded by the UK Department of Trade & Industry and Scottish Trade International.

Karen returned to Denmark in 2002 to take up a post with the Danish Ministry of Science, Technology and Innovation and was in particular involved in activities related to biotechnology and commercialisation.